Review of the Samsung NX1 for filmmakers

I’ll start off with the conclusion: the NX1 is an amazing camera that is technologically ahead of its time. If you need a camera that has a more detailed image and better color science than any of the current 4K competition, a mirrorless camera with the build-quality, battery life, autofocus and weather sealing of a pro DLSR, and the intuitive interface and connectivity options of a high-end smartphone, look no further: the Samsung NX1 is the camera for you.

In many ways the NX1 is the first mirrorless camera to not only compete with other mirrorless cameras, but also take on traditional APS-C DSLRs. Just look at the design of the body. Samsung didn’t go for the retro-style mirrorless body so many other manufacturers went for, but focussed on solid DSLR-like ergonomics instead of fashionable looks. This makes the camera handle so much nicer than the miniature grips and finicky buttons found on other mirrorless cameras.

Another clue as to which cameras the NX1 really competes with is revelead when we take a closer look at the specs compared to Canons flagship APS-C DSLR, the 7D Mark II: 4K video vs HD, 15fps vs 12fps burst rate, a 5-core vs a dual-core CPU, a 28MP (6.5K) sensor vs 20MP, H.265 vs H.264 codecs and the list goes on. It even beats the 7D Mark II when it comes to focus speed! This is the first mirrorless camera that not only outperforms its direct competitors, but also DSLRs that up to now have had a leg up when in comes to build-quality, autofocus speed and burst rate. Give the NX1 any APS-C DSLR, and it will eat it.

More importantly for filmmakers though: the NX1 downsamples its image from a 6.5K sensor to generate one of the most detailed 4K images available. Images from the A7s Mk II and GH4 look mushy on my 5K iMac, compared to the glorious detail in the NX1's image. And where the Panny and (notoriously) Sony struggle to get their color science right, the NX1 comes with very pleasing (Canon-like) colors and natural skin-tones out of the box. They don't charge you for a flat color-profile either: it comes as a free software update.

In many ways, the NX1 is technologically ahead of its time, which makes it all the more puzzling that Samsung recently decided to pull the NX1 from the market. The upside of this, is that it has never been more affordable to own such advanced technology. You can get an NX1 now for less than a GH4, slap on a cheap lens adapter and be happy. Bottom line: get one while you still can, it might take a few years before others have caught up with what Samsung is presenting here. 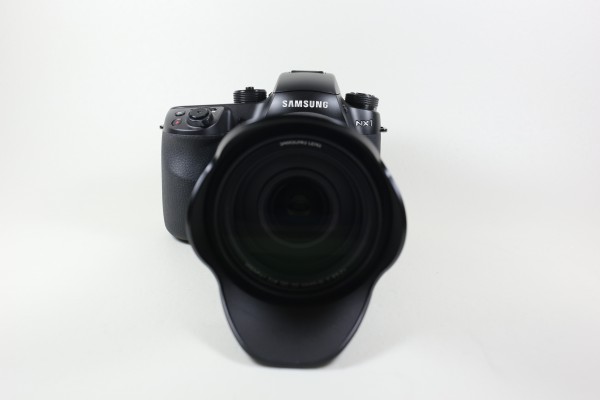 One of the NX1's biggest party pieces is its gloriuos amount of detail. The trick Samsung pulls here is taking a full-sensor readout of the 6.5K image, and (helped by its 5-core CPU) downsizing it to 4K without line-skipping/pixel-binning. The GH4 and A7s by contrast start off from a much lower-resolution image. Theroretically such a detailed image can lead to aliasing/moiré, but I have yet to come across an instance of this in my footage. Als cheack out Mattias Burlings infamous "Building of Moiré"-tests to see how well the NX1 fares against the competition.

While I love the Sony A7s for its low-light capabilities, getting skin tones to look natural on any of the Sony cameras has been a struggle (and I am not the only one). Panasonics are easier to work with, but tend to have a more video-y color rendition. The colors out of the NX1 by contrast are warm and Canon-like, and skin-tones look very natural. Furthermore, footage shot with the Gamma DR profile responds very very well to any color adjustment or LUT you throw at it.

The NX1 comes with a flat profile called Gamma DR, which is actually very nice, as it retains much of the color-information (albeit subdued) while bringing down the black levels. This means you get the full dynamic range of the sensor, without having to spend hours trying to restore skins-tones or get the colors to look natural. If you prefer, you can get an even flatter profile by turning down sharpness, contrast and saturation, but in my testing this messes the colors up. To me the sweet spot is using Gamma DR at default settings, with sharpness between -3 and -5.

Low light performance is slightly better than the GH4, but of course nowhere near the performance of the A7s. Horses for courses. ISO 800 is super clean, and ISO 1600 is perfectly useable. Avoid going higher than ISO 1600 though, as at ISO 3200 the noise-reduction kicks in rather harshly.

Like I said in the introduction, Samsung chose to design the NX1 much more like a DSLR, and in doing so created a mirrorless camera that handles better than any of my Canon DSLRs. This is partly due to the comfortable handgrip, but Samsung also added a chunky thumb-rest, which makes the camera just lock into your hand as if it were a piece of LEGO. I’ve always liked Nikons on/off switch which is part of the shutter-button, and the NX1 works exactly the same way. The body is littered with customizable buttons, and although the record button is a little too submerged into the body for my taste, the placement is great (next to the shutter-button). If you prefer, you can also assign the wifi-button at the back to function as the record-button (Canon-style).

Samsung went all-out on display options by adding a high-resolution tiltable AMOLED display that has pretty amazing color rendition. The EVF is bigger than the competition and its comfortable eye-cup makes it feel much more like a DSLRs optical viewfinder. Oh, did I mention there’s also an illuminated settings-panel on the top ánd a clean HDMI out for external monitoring/recording? I’ll just leave out the fact that you can also monitor/control the camera over wifi.

Another advantage Samsung has over companies like Canon, Nikon, Panny and Sony, is its years of experience in designing smartphones. The menu really resembles that of a high-end smartphone: you can control it through the touchscreen or through dedicated buttons on the body. It is quick, responsive and with very smooth animations, but it gets even nicer when you try to send an image to your smartphone. On most mirrorless cameras this is a painstaking process involving a back-and-forth between settings, apps, browser-windows and your camera. Not so on the NX1: press the wifi-button, type in your wifi-password on the touch-screen display, and off you go!

One of the downsides of most mirrorless systems, is their limited choice of native lenses. Luckily, most lenses in Samsungs line-up (especially the S-lenses) are top-notch, and cheap adapters allow you to use any other lens on the NX1. If you’re thinking of getting at least one native Samsung lens, get the Samsung 16-50 f2-2.8 S lens. It’s as sharp as the Canon equivalent, and allows you to make full use of one of the NX1’s party pieces: the DSLR-like autofocus performance. In video mode, you can also use the rather nifty touch-to-focus feature, and you get weather-sealing and image stabilization.

As a Canon-user I found it a little awkward to get used to the opposite focus and zoom-direction, but Nikon users will feel right at home. Another downside of the native Samsung lenses is that they are (just like Sony’s and Panasonic’s lenses) focus-by-wire. But the focus-peaking on the NX1 is so well-implemented, that I didn’t notice it most of the time. Another thumbs-up for Samsungs software department.

You could also opt for getting one of Samsungs cheap but rather splendid pancake lenses, or just get a passive adapter and throw on any of your current lenses. Do keep in mind that there are currently no active adapters for the NX-mount, which means you’ll lose autofocus (not an issue for filmmaking) and aperture control on lenses that don’t have manual aperture rings. I got the cheap Kiwi Photo Nx to Canon Eos adapter, and used my Canon lenses wide open without a problem.

Another downside of using a passive adapter is that you also lose any image stabilization your lens might have. But through one of the many firmware updates Samsung now offers a solution for this problem in the form of the Digital Image Stabilization (DIS) feature. This feature allows you to stabilize lenses that don’t have native image stabilization. It does so by slightly cropping in on the image, allowing for a live warp-stabilizer-like software stabilization. From my initial testing it works rather smoothly, but do keep in mind that it will not work as effective as the sensor-based stabilization in the A7s II.

My advice would be to get a passive adapter so you can use any lenses you might already have, and get at least one native Samsung lens for run-and-gun type situations (or photography, of course!). 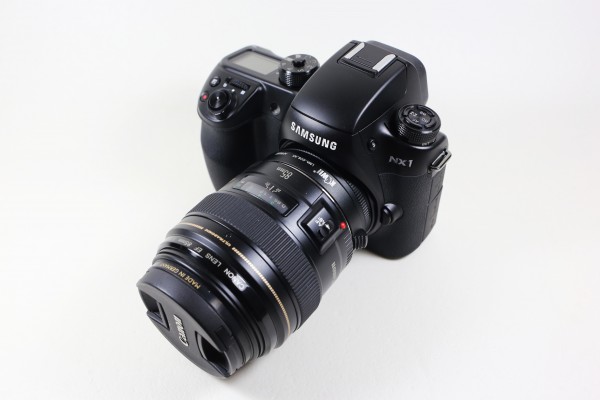 Using a cheap passive adapter on the NX1

Where the GH4 and A7s (II) are mostly video-focussed devices, the NX1 hasn’t scrimped on either side: it has just as much to offer for photographers (high-resolution sensor, 15fps burst rate, fast autofocus, built-in time-lapse capabilities) as for videographers (4K video, peaking, mic- and headphone-jacks, audio-meters, 120fps slow-motion in full HD). In that sense, it’s the first true hybrid 4K mirrorless camera.

In creating the NX1, Samsung set out to make the first mirrorless camera that can directly compete with a high-end APS-C DLSR. It leaves behind other mirrorless cameras when it comes to focus speed and handling, and it surpasses any current APS-C DSLR when it comes to 4K video, a burst rate of 15fps and easy connectivity. Most important for filmmakers though, is its highly detailed 4K image, with smooth motion reproduction and smart color science. I’ll say it again: get one now, while you still can!